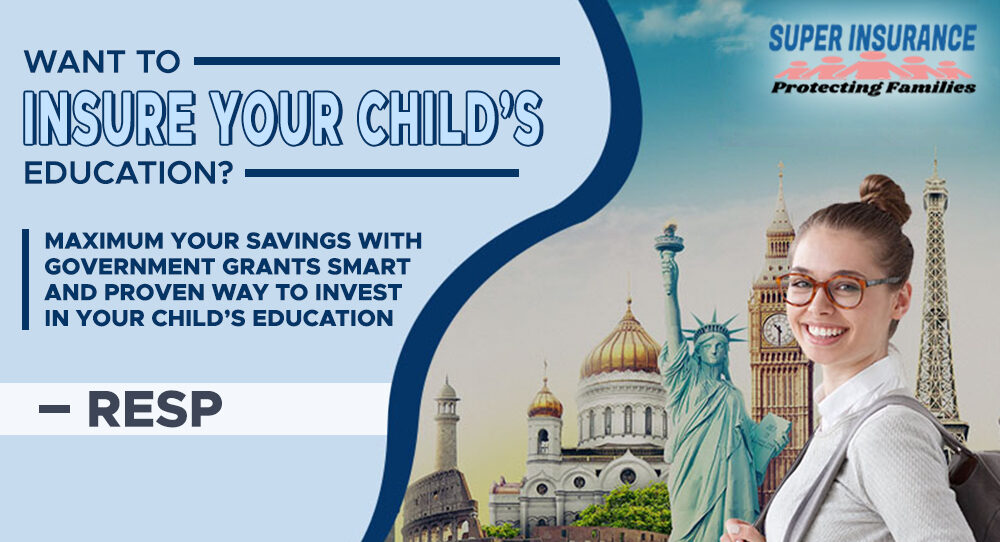 The dreams of your children receiving a post-secondary education are getting more and more out of reach. Watching your children trying to claw their way out of debt is hard for any parent.
An RESP (Registered Education Saving Plan Alberta) can help reduce that future burden or even get rid of it entirely.

» Maximum RESP contribution A lifetime limit of $50,000 per beneficiary can be contributed to an RESP, which can be kept open for up to 36 years.
» RESP tax implications: Interest earned on an RESP is tax-free. When the plan’s beneficiary starts withdrawing the money for school, only the accumulated interest is taxable as income.
» Who contribute to an RESP?
Anyone can contribute to an RESP, not just the parents of the child, so you can open or contribute to the RESP of a grandchild, niece, nephew, godson, goddaughter, neighbor’s kid, etc. You can even open an RESP for yourself.
» Subscriber: The subscriber is the individual who opens an RESP account, entering into a contract with a promoter and naming one or several beneficiaries on whose behalf the contributions are made. For individual plans, there are no restrictions on who can be a subscriber.
» Beneficiary: The beneficiary of an RESP is the person (usually the child of the subscriber, but not necessarily) who will benefit from the contributions made in the RESP.
» Promoter: Is the institution or company that sets up the RESP and pays the contributions as well as the income earned on the contributions to the beneficiaries.
» Educational Assistance Payments (EAP): EAPs are funds beneficiaries can withdraw from an RESP account to pay for their post-secondary education. They include the earnings (interest and other income) accumulated in an RESP as well as government grants but do not include the subscriber’s contributions. When withdrawn, they count as taxable income for the beneficiary.
» Refund of Contributions (ROC): An ROC is a withdrawal of the contributions. Because contributions were made from a subscriber’s after-tax income, an ROC has no additional tax penalty.
» Accumulated Income Payments (AIP): AIPs are withdrawals of the income earned on an RESP available if the beneficiary does not attend post-secondary education. It does not include any government grants, which are returned to the government. AIPs become taxable income once withdrawn. If you have unused contribution, you can reduce the amount of tax you pay by transferring your AIP directly to your RRSP.
» Canada Education Savings Grant (CESG): The CESG is a federal grant that matches a percentage of the subscriber’s contributions to an RESP up to $7,200.
» British Columbia Training and Education Savings Grant (BCTESG):The BCTESG is a provincial incentive that provides a one-time grant of $1,200 towards an RESP for residents of BC born in 2006 or later. The BCTESG is available on the child’s sixth birthday.
» Canada Learning Bond (CLB):The CLB is a federal government grant to help income-qualified families save for their children’s post-secondary education.

Low-income families may qualify for additional government grants through:

1. Additional Canada Education Savings Grant: You qualify for the additional CESG if your household’s net income is less than $95,259 (2019).
2. Canada Learning Bond (CLB): $500 CLB is initially paid into the child’s RESP to help them get started, and an additional $100 is added each year (if eligible) until they turn 15 for a lifetime maximum of $2000.
3. Provincial Grants: Some provinces also provide grants to encourage eligible residents to save for their children’s education. These include the British Columbia Training and Education Savings Grant, and Saskatchewan Advantage Grant for Education Savings.